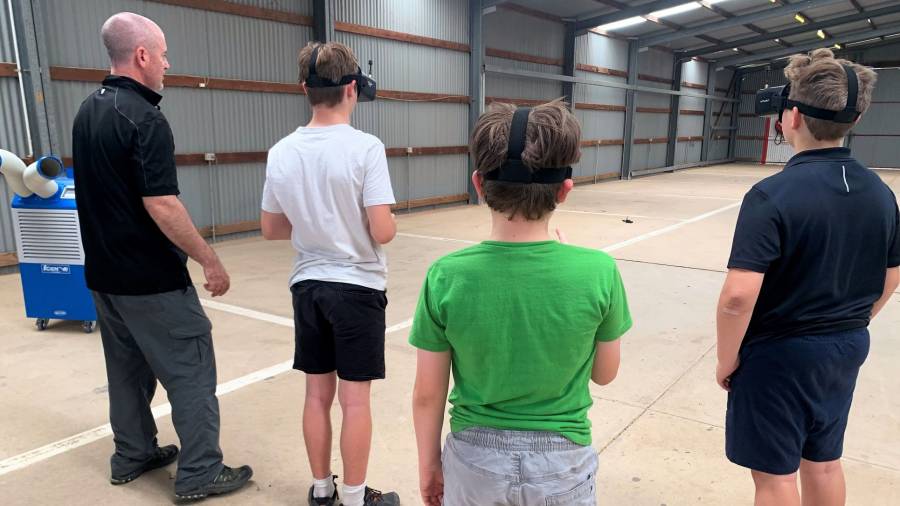 Throughout the year hundreds of kids from the Central Australian town are given a taste of cutting-edge drone technology by the innovative and forward-thinking local company, Central Drones.

“It’s a lot of fun and hugely popular. We had 46 turn up for our first ‘Try and Fly’, with great attendance during the recent Easter holidays,” said Central Drones Business Manager and Chief Remote Pilot Luke Hoolihan.

“When we see a kid launch their first drone there’s a real mix of excitement, confidence and wonder in the air. They also learn about problem solving and dexterity and gain so much confidence.”

Central Drones is the first Australian company to import the pioneering autonomous tethered drone-in-a-box, manufactured by Easy Aerial from the United States. Using this state-of-the-art drone system the business collaborated with local police and Hunter Murray of AliceTronics as part of the STEM School Holiday Innovation Holiday Program in Alice.

“What we’re doing is actually not even about the drones,” Luke said. “It’s about science and technology and empowering kids to become involved in it.

“Another added benefit is local kids see the police working in a different context which produces positive long-term impacts for them and the community.”

One course - Drone Racing - allows groups of school children from the age of 12 upwards to watch a drone being dismantled, and learn the basics of circuitry and soldering.

Working in pairs and capped at 10 participants, they then learn to pilot and race their drones in a specially adapted shed in the Alice Springs showgrounds.

The program, which is currently only available during the summer, shows youngsters how far they can take this concept into future technology and employment.

“There are so many things - electric bikes, electric skateboards, mobile phones, drones and space shuttles - that have electronic circuitry,” he said.

“Obviously, the systems in mobiles and space shuttles are way more complicated and complex but an activity like this opens their eyes to so many possibilities and career pathways.”

Luke, who assists in the running of Central Drones alongside CEO Kerry Heness, believes drones are integral to the future of technology and the economy.

According to a government study published by Deloitte in 2020, the economic impact of drones contributes to an estimated $5.5 billion to the Australian economy, which will rise to $14.5 billion by 2040.

“The scope of using drones within our daily lives is growing exponentially, with more and more people getting into the drone industry and achieving incredible things,” Luke said.

“We really want all kids to develop an early love of tech so the brightest minds continue on in the industry when they’re older.”

“We need to attract more kids, and especially girls, to STEM pathways once they leave school. They need to see how enjoyable and rewarding it can be working in the industry.”