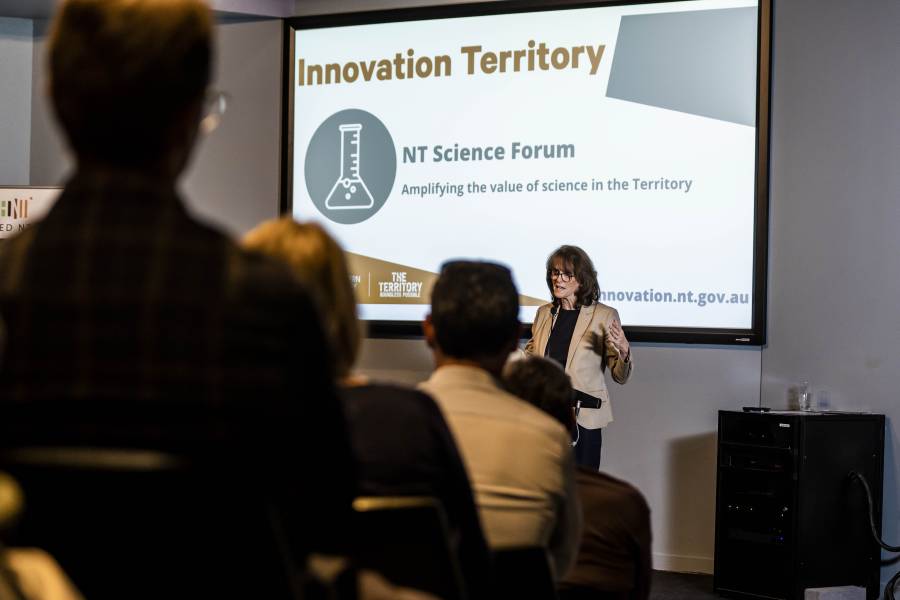 Territory STEM professionals have been invited to join the science community at the first meeting of the Northern Territory Science Forum on Thursday, 11 August.

Launched in Darwin in July, the NT Science Forum was set up to support engagement between scientists across the public, private, and academic sectors to amplify the importance of science and to harness opportunities and insights to amplify the role of science in the Territory.

The Forum, which is open to all Territory STEM professionals, is part of the Northern Territory Government’s Territory Business Innovation Strategy 2.0 to develop a $4 billion Territory innovation ecosystem to support the achievement of a $40 billion economy in the Territory by 2030.

Catherine White, Acting CEO of the Department of industry, Tourism and Trade (DITT), said at the event that science has been identified as critical in achieving this goal.

“We know that science is a highly valuable industry for the Territory,” she said. “Science has an intrinsic value and is a driver of wealth creation across our economy, including priority sectors identified by the Territory Economic Reconstruction Commission (TERC).

“Our challenge is to spread the science word, get everyone hooked and amplify the value of science in the Territory.”

Alongside the launch of the new NT Science Forum, the government has commissioned the Australian Council of Learned Academies (supported by the Australian Academy of Science) to submit an independent report on opportunities for science to support a $40 billion economy in the Territory.

Dr Foley, like all the speakers, said that the Territory was standing out as a place with amazing ideas, vision and ambition in terms of innovation, science and technology.

“The ambition to be the quantum leader of the equator is something I’m putting in our national strategy,” she said.

She highlighted that the Territory, like the rest of Australia, also has a great deal to learn from Indigenous knowledge, and that this respectful learning opportunity has been a recurring theme in science discussions with leaders nationally and internationally.

Alan Anderson, Professor (Research Excellence and Impact) at Charles Darwin University’s Office of Research and Innovation, emceed the event held at the Museum and Art Gallery of the Northern Territory (MAGNT).

Professor Anderson has been doing incredible work on collecting and recording species of ants in a Darwin lab, finding 27 species of ant in two days in Kakadu National Park.  Read the full story.

His work, along with the contributions of STEM professionals in the Territory, highlights how the NT Science Forum is an exciting platform to celebrate Territory science.

The Forum will also advocate and identify opportunities for science to support the sustainable development of the Territory and to provide the underpinning foundation of innovation to support NT Business growth.

The agenda for the NT Science Forum’s first meeting will include calls for expressions of interest in the role of Chair, positions on the leadership committee, as well as discussion regarding membership and roles of the Forum.

If you wish to attend the August meeting, register via Eventbrite.